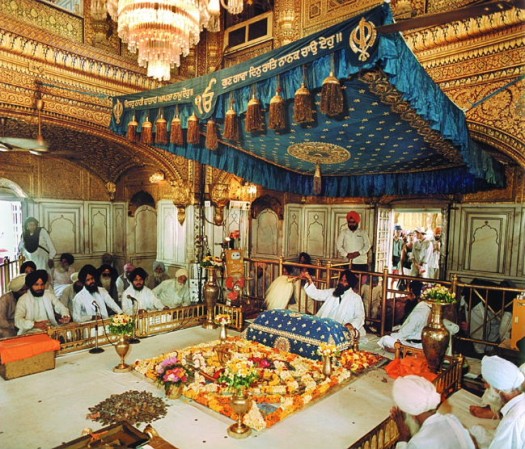 The Sikh Temple is called the Gurdwara. In ever Gurdwara the Sikh holy scripture, Guru Granth Sahib, is installed int he main hall, which is used for prayer and daily services.

Every person, irrespective of caste, creed, culture, or nationality can visit. Before entering the Gurdwara, one must take off their shoes and cover their heads. On entering the main hall, everyone approaches the Guru Granth Sahib and bows before it in reverence and takes their place among the sangat or congregation.

Any Sikh, male or female, may conduct the prayer or perform services.

Services usually begin with the singing of hymns with musical instruments. On special occasions, singing is intercepted with lectures, poems, or other compositions highlighting events from Sikh history. The services are concluded with Ardas, a supplication prayer which invokes God’s blessings in granting peace, prosperity and protection to all of mankind.

After the prayers, scripture is read from Guru Granth Sahib and then Karah Parshad, a sweet semolina pudding made from flour, sugar and butter is distributed to the congregation as a blessing.

On each Gurdwara, a Nishan Sahib or flag is erected with a Khanda, the double edged sword. This symbolises the combination of temporal and spiritual aspects of Sikh life.

Each city or town has Gurdwaras according to their requirements. All of them have the same sanctity. There are some Gurdwaras which in addition to being a place of prayer also have historical importance. The five most important Gurdwaras are known as Takhts or seats of authority.

These are Takht Patna Sahib in Bihar, Takht Kesgarh Sahib at Anandpur Sahib, Takht Damdama Sahib at Talwandi-Sabo in Punjab, Takht Hazoor Sahib at Nanded in Maharashtra, and Akal Takht Sahib at Amritsar Sahib, which is also the supreme seat of authority. Relgious as well as temporal injunctions are issues from here from time to time for the guidance of the Sikh community. These injunctions are known as Hukamnamas and have the binding force of Sikh Personal Law.

There is no such class as priesthood in Sikhism. However, the one who performs the daily service at a Gurdwara is called the Granthi. The hymn singers are called Ragis and the singing of hymns is called Kirtan (praise of the Lord).